This system complements, but also moves just a little beyond, the normal PbtA game-flow. Individual Units can act like discrete individuals on the battlefield. When a PC commands a Unit, the player may direct the Unit as if it were a second PC, rather than resolving all the Unit’s actions only in connection with the PC’s own dice rolls. This keeps the actual rolls ‘player-facing,’ but it allows a larger array of Units to function meaningfully on the battlefield, without limiting the PCs’ own individual actions. It also prevents weird edge cases in which a PC’s STATS are used to determine Unit outcomes in ways that make little sense.

On a case-by-case basis, the GM may break down a Unit’s Quality bonuses in a few categories:
When Fighting…
When Maneuvering…
When Standing Fast…

(For example – Forest Skirmishers: Fighting +0, Maneuvering +1, Standing Fast -1).
…but normally the basic one-STAT list given above should be adequate.

HOW TO FIGHT WITH OR AGAINST UNITS:

For its combat statistics, a Unit uses the statistics of one of its average members. So, for example, a Large Unit of 100 Green peasant spearmen might have the following stats:

Whereas a smaller band of Brigands might look much tougher:

...even though the Brigands are only two steps from oblivion (see below), as opposed to four downgrades left for the much larger group of peasants.

Individuals (that's you, PCs) fighting Units can only roll 1d4 as their damage die, max, but this die-result may be increased by normal damage modifiers (spending ‘Mettle’, ‘Melee’ ability bonus, magic weapon damage bonuses, etc.). If an individual’s attack has the Area tag, then it may deal damage as normal and is not limited to the 1d4 attack die (for example, fireball spells or alchemical bombs are not limited to dealing 1d4 base damage).

Each step up the Unit hierarchy gives a larger Unit +1 Damage, and +1 Armor. [EDIT: Moreover, when a Unit fights against an Individual, the unit inflicts +1d6 Damage instead of +1 Damage for each step up the size hierarchy, so that (for example) a Small Unit of Archers (bows, 1d6 damage) inflicts 1d6 +2d6 Damage when attacking an Individual].

When a Unit reaches 0 HP, it automatically loses a step, downgrading to a Unit of the size below it, and tests Morale to avoid routing. Tiny Units that reach 0 HP are destroyed.

Overflow Damage does not ‘roll over’ when a Unit downgrades; a Unit will only downgrade one step from any single attack – for example, a fireball attack on a Medium Unit can only downgrade it to a Small Unit, even if the total damage is not exhausted by the first downgrade.

Proximity – a PC may join in Proximity with a unit. When in Proximity:
-       a PC benefits from the Size Armor bonus (if any) of the Unit;
-       a PC may try to restrain the Unit to prevent a rout (after failing a morale test)
-       a PC also takes damage along with the unit whenever it suffers harm.

TESTING UNIT MORALE - at 0 hp, downgrade the Unit, then roll 2d6 + Nothing.
On 8+, the Unit holds and doesn’t rout (yet). On 7-, the Unit routs, unless a PC in Proximity passes a Hold Unit check.
·      Modifiers:
-1 if the unit is Green/Frightened,
+1 for Veterans,
+2 for Elites.
(Can treat Large creatures as +1, Huge creatures as +2, or even forego the roll at all for Huge creatures, and maybe Large too, and Brave combatants, on a case-by-case basis).

NPC Commanders of note may grant bonuses as they try to rally their troops, too.

Hold Unit: When a unit routs, a PC in Proximity to the Unit may roll +CHA to try to hold them in place with a rousing speech. It had better be a good speech.
·      10+, the unit holds instead of routing.
·      7-9, the unit holds instead of routing, but choose one:
o   They’re in bad shape, and lose 1d4 further hit points, unmodified by Armor,
o   OR the enemy capitalizes on your little speech to advance further on the field of battle,
o   OR the GM chooses something (which might be one of those two options).
·      6-: the unit breaks, and your feeble attempt to hold them un-nerves other troops - all allied Units in LOS of the breaking unit must test morale, too!
Posted by Gundobad at 12:50 PM 5 comments:

Putting the MY back in Mystara: a rough map for a new campaign...

Well, I'm indulging in a fun side-post even though I need to finish up that series on simple domain play and mass combat procedures (I still shake my head thinking that I initially intended to write "a single post" on streamlined options for domain play. Good grief; Post Part 5 is still in Draft form...).

At any rate, I thought I'd chat up what's going on at my gaming table. My players recently finished a really enjoyable play-through of a heavily modified B10, Night's Dark Terror, a classic, sandboxy romp through the northeast of the Grand Duchy of Karameikos in Mystara, the "known world" setting of the old BECMI-box days (those are affiliate links above, by the way). B10 is an excellent module (though I recommend some modifications, which I may just elaborate...in another post).

For now, suffice it to say that our players completed the basic arc of the B10 module, and in doing so saved the world (not because B10 tells you to, but because I added a big doomsday threat in the non-spoiler-ese 'place that B10 takes you to.'). Last night, we picked up again to kick off our next campaign arc, which will use X1, The Isle of Dread, as a chassis - heavily "chromed" by a bunch of other stuff, including classic modules and a lot of faction stuff of my own devising.

[In the very unlikely event that any of my players are reading this, tune out and stop reading NOW to avoid the risk of spoilers].

I'm sharing below a very crude, rough map that I threw together quickly on Powerpoint for my players before last night's session. It's a garbage map, but it illustrates how a GM might take the "official canon" of old-school Mystara and modify it very heavily to suit a local campaign. For one thing, our campaign is set in a fictional Iron Age setting, not the sorta-generic-medieval-ish setting of the Mystara boxed sets. This means that our "Minrothad" directly evokes Phoenicians and Carthaginians; Thyatians are sort of Neo-Babylonians mixed with Romans. 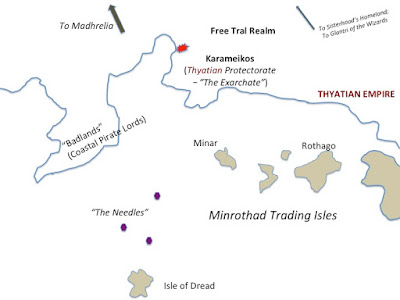 Anyone familiar with the map of Mystara should notice some dramatic changes here. Ierendi simply does not exist, because...well, because Ierendi. One PC is from "Madhrelia" which the player invented, but they're basically the Huns, so, Ethengar Khanate. Note that the great Mystaran playground of Karameikos has seen some dramatic, dramatic changes. I decided to play up Karameikan/Thyatian and Traldar ethnic tensions quite a bit more than is 'canon' during our campaign, which led to some exploration of premodern colonial/imperial expansion and its resulting tensions as an ongoing element in play. At the conclusion of the campaign arc, I gave the players some very simple tools to dictate what developments they would most want to see happen in the world around them over the next few season before our second campaign arc (with the understanding that there were too many pressing needs to fix everything; they each got just one pick for tweaking 'current events'). All that culminated with the players leading an insurrection at the campaign's end that helped create a free Traldar (just "Tral" in our campaign) kingdom in what had been the north of Karameikos (the family of Stephan and Pyotr, from B10, emerged as the initial ruling family!). Meanwhile the Iron Ring slavers got stomped on hard (the red smush on the map west of Karameikos is what used to be their stronhold).

In the new normal for the next campaign arc, Thyatians are the big expansionist power coming to get everyone. Our "not-Phoenician" Minrothad is still a group of trading-house islands, but the great port of Rothago has dominated its Minrothad fellows so that now only one other port, Minar, stands apart from their hegemony. Minar has invited the Thyatians to back them up (nothing could possibly go wrong with that strategy!) and the Thyatians have also 'generously' stepped in to hold together southern Karameikos after the collapse of Karameikan rule up north. The PCs have learned that one member of the recently-overthrown Thyatian dynasty is alive in hiding somewhere in the Sea of Dread. Speaking of which - each of the PCs has their own reason to go to the Isle of Dread, but those reasons mainly revolve around uncovering the history of the fallen Nithian Empire, because something connected to it is stirring and an ancient threat awakens...insert typical theme music.

I drew up a network map to plot out the interrelationships of various faction leaders. One of my kids complained that it was impossible to figure out, but I protested that it's no worse to keep track of than the eastern Mediterranean during the Roman Republic (yeah, I'm a nerd). To clarify, this relationship map is for me, not the players. To add color, depth, and surprise to these relationships, I used random tables from Renegade Crowns (affiliate link), an old Warhammer Fantasy sourcebook, with pleasing results. 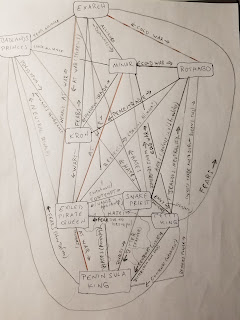 Anyway - thanks for reading. As I hope these ideas illustrate, the settled canon of an old D&D setting is always YOURS to modify as you wish at your own table. I never would have expected a year ago, that I'd be presiding over the destruction of Karameikos, but my players clearly enjoy the agency and empowerment they get from being active shapers of the world, and not merely passive recipients of a frozen status quo.

By the end of our kick-off session last night, alchemical accidents by the party's physician had made one character grow wolf-fangs (permanent) and another stink horribly (temporary), another character discovered that he gets sea-sick, and now the players have reached the Isle and are ready for ... what lies ahead.