This past weekend, I carved out some time to attack the 'unpainted' pile. Exhibit A is an interestingly kitbashed Warhammer Chaos champion. I bought this fella second-hand last year as part of an army of Chaos figures that draw heavily on kitbashing with (for example) Stormcast Eternal parts or even bits from 40k. This particular specimen combines a 'Nurgle'-style mutated maw-in-the-tummy with a very sci-fantasy-leaning mechanical claw arm (I'm *still* not sure where the arm comes from; something Necron, maybe?).

I fancy myself an advanced Beginner painter, or maybe a Mega-Noob Intermediate painter, or something in there. Despite a few missed strokes I'm quite happy with this guy's overall appearance. 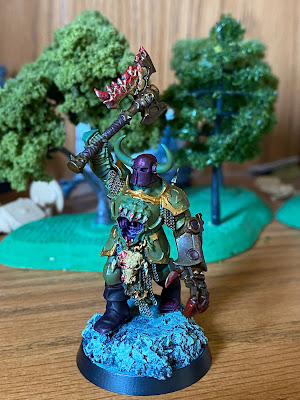 This was also an early opportunity to try out the new-ish Army Painter Speedpaint collection, a recent splurge. It seems these speedpaints are taking the mini-painting world by storm, so I have been eager to try my hand at them. The paint-job featured here combines several types of paint. When I acquired the figure, it was already wearing a sort of minimalist blue and gray coat of paint. 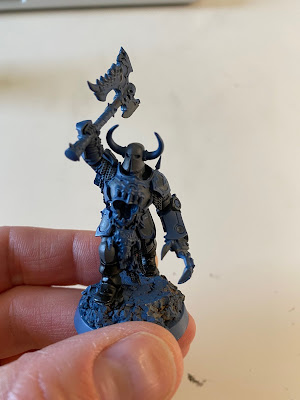 To proceed, I first drybrushed with silver... 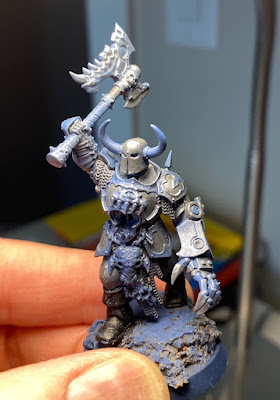 ...and then got to work, laying down (mostly) speedpaints supplemented by 'regular', metallic, and blood-effect paints for some specific local touches. 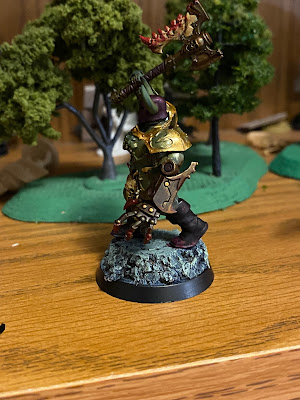 One thing that really strikes me is the impact of the undercoat color when using these translucent speedpaints. The green on this champion is 'Malignant Green' (the 'Nurgle' color), but it came out very dark on top of the blue basecoat. The mechanical claw is painted with Stone Golem, and I think it makes a very nice 'dull bronze' look - but it is exactly the same speedpaint color used to paint the bare, white bases on these 'just tabletop ready' sci-fi grunts from Reaper Bones! 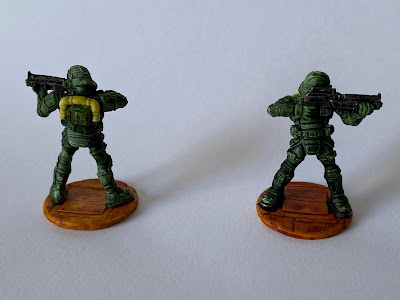 ...Slapping out three of these Reaper Bones grunts, including pre-work with silver touches here and there, took about 40 minutes total (!). This stuff is great for batch processing units.
Although I can see that the Speedpaints require their own skillset, I'm quite pleased after my initial trials.

Posted by Gundobad at 4:55 PM No comments:

Old but (Fairly) Good: AC4, The Book of Marvelous Magic

I recently picked up a .pdf copy of AC4, The Book of Marvelous Magic [affiliate link], by Mentzer & Gygax (1985). Although I vaguely remember inheriting a print copy of this book as a teenager, this is not a resource that seems to command much attention nowadays in the OSR-ish blogosphere. Although there are some good reasons for the book's present obscurity, there's enough genuine usefulness between the covers that AC4's fairly inexpensive availability on DTRPG deserves more notice. 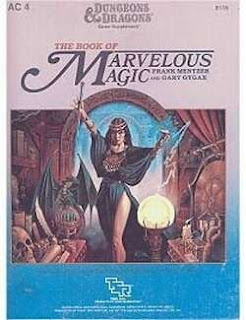 So, what is it? AC4 is a collection of magic items, not spells or other magic abilities. It contains "all the miscellaneous magic items that appeared in the Basic, Expert, and Companion Sets" - along with an additional 500 new items. The book is pitched as suitable for both D&D (that is, BECMI) and AD&D; an appendix states that "The D&D and AD&D games are actually different games" - then describes D&D as flexible and open to what we now call hacking, with AD&D too complex to make house-rules prudent. Harrumph. I will return below to the question of using these magic items across different rule-systems.

The book is arranged alphabetically by item type. Refreshingly (depending on one's perspective), this is very far from a list of standard dungeon-crawling items with arcane abilities slapped on. No, this feels more like an array of magical items from folklore fantasy literature, with spools, thimbles, masts, anchors, kettles, and strings concealing their mysterious powers.

I would group the book's items into several categories. To be clear, some of these are (to me) useless rubbish, so it's the latter categories that really catch my eye:

+ Placeholder references to earlier published material. Ya know, like these:

In other words, these entries don't contribute anything, except that they're integrated with new stuff on the book's random-roll treasure tables.

The book opens right on this note with the "Alternate World Gate", which could be cool, except that they are a variety of items that port in characters from other 1980s TSR games, like Top Secret, Gamma World, Boot Hill, and Gangbusters.

+ Cursed items. Well, at least we're getting to material that might actually contribute something new in-game. Historically, I have tended to avoid seeding hoards with cursed items - partly because I don't love 'gotcha' games with my players, and especially because I didn't have great mechanical ways to incorporate cursed treasure without making treasure identification a risky drag. (That has now changed with my house-ruled simple 1d6 treasure identification rules, which I find fun, easy, useful, and still respecting of player agency and risk/reward judgments). So, now I'm more willing to incorporate cursed items here and there. There are a LOT of them in this book. Probably far too many, to be honest - and they tend to be sneaky little things that look and initially act just like one of the already-obscure helpful magic items first published here in AC4 (I suspect this means TSR expected, or wanted, players to buy and comb through this GM resource, becoming familiar with the loot they could gain, so that they'd genuinely worry about whether they'd just found a "Cymbal of Crashing" or a cursed "Cymbal of Symbols").

Now, look: up to this point, I've been wasting your time in the interests of an honest, comprehensive overview/review. It's the final category that makes this thing worth your attention:

+ Quirky, genuinely useful new magic items. I like that these tend to affect the game's 'fictional positioning', if you will, rather than just slapping some +2s on everything. The items' applicability to the narrative rather than the mechanics makes this book a handy and fairly system-neutral resource. I'm currently running two campaigns: one in the very light EZd6, the other in Pathfinder 2e. I can use AC4 equally well in either campaign! I'm not kidding; here's a magic item that will appear in the dungeon my PF2e players are now raiding:

ARMCHAIR
Armchair #2: Armchair of Relaxing. When sat upon, this item vanishes along with its user, and travels to the Outer Plane. The user is instantly put to sleep and has no saving throw. The armchair reappears in 1 turn and awakens and releases its user; it bestows magical rest, as if its user had a full night's sleep during that period on the Outer Plane. The chair functions once per day.

In use, I'll be making this something a bit more period-suitable than an 'armchair', but the players will have reason to wonder why the BBEG has two separate beds in their bedchamber, and they have been warned by a covert ally 'not to let the leader go to bed.' This requires basically no conversion to run in PF2e.

Here are a few other magic items that piqued my interest.

Brooch, Lunar: This piece of jewelry bears the likeness of a crescent moon. If worn by a spell caster, it bestows additional power to any light or continual light spell cast. The light from either spell causes any and all lycanthropes in the area of effect to assume animal form (no saving throw). They remain as animals until they leave the lighted area. The lunar brooch has no command word and operates continuously while worn.

Fork of Travel: This copper-colored fork may be placed at any intersection, and it will point (on command) toward either the most dangerous, safest, shortest, or longest route, as desired by the user. It may be used three times per day. For answers about distance, the destination must be known and named.

Fishing Gong: This gong has a rune inscribed in its center that reads "Bass." A read magic spell is needed to translate it. If taken aboard a vessel and rung over any body of water that contains fish, the sound causes one fish weighing 1-100 pounds to leap out of the water and into the vessel, landing next to the user of the gong. After cleaning and cooking, each 5 pounds of live fish can be used to feed one person for one day. The gong can be used three times a day.

September Horn: This horn appears and functions as a horn of plenty. However, except for the horn itself, it also causes all magical items worn or carried to vanish. The items are not destroyed, but merely return to the user's home. The September Horn can be used once per day at most. [Is this a cursed item, or a really useful tool? That depends on the PC's context!]

Nail of Building: If this nail is the first nail used in building a wooden structure made entirely of ordinary wood and nails, the magic nail may be removed after the structure is complete. This removal causes the entire structure to disappear! The nail can then be easily carried about, and when the user wishes to re-create the structure at any given location, one command word causes it to re-appear. The nail then becomes nonmagical. [I really like that this is a one-shot item. If you plan ahead, you can bring your own defensive stockade for that showdown in the dungeon - but only once!].

All in all, AC4 The Book of Marvelous Magic sags from too much chaff, but it also offers many inspiring and fun items that your players can exploit with some creative thinking. At a higher price, this might be a stretch to recommend, but the .pdf is fairly priced at $4.99 on DTRPG.com - and during their ongoing July sale, it's down to $3.74 (affiliate link). If you have a weather eye out for new magic items, this could be worth consulting.