SWORDS ARE NO MORE USE HERE! (Monster ratings, damage limits, and a rules-solution in search of a problem?)

"SWORDS ARE NO MORE USE HERE!" Thus warns Gandalf in an iconic cinematic moment. Ai, ai, and alas, for those words are not actually uttered at the Bridge of Khazad-Dum...in the novel. But they sure make a memorable line in the movie. Well, the sentiment is clearly present in the book; Gandalf does caution that "This is a foe beyond any of you. I must hold the narrow way."  And a bit earlier, before the Balrog reveals itself, Gandalf says this about an indirect encounter with the thing:

What it was I cannot guess, but I have never felt such a challenge. The counter-spell was terrible. It nearly broke me. ... Ah! I have never felt so spent, but it is passing ... And now what about you, Frodo? ... I feared that it was a brave but dead hobbit that Aragorn was carrying.

Gandalf and Frodo together - one of Middle Earth's mightiest, and one of its weakest, in the same party. But what sets them apart - for that matter, what sets apart Gandalf even from Aragorn or Legolas - is not merely a greater number of Hit Dice. Gandalf can face the Balrog only because he operates on a qualitatively higher level of power than his companions do, and therefore he must face the Balrog alone.

In the rules-light horror RPG Cthulhu Dark, "If you fight any [Mythos] creature you meet, you will die. Thus, in these core rules, there are no combat rules or health levels. Instead, roll to hide or escape." That's certainly a decisive way to handle different power levels - Mythos creatures are so far beyond mortal humans that confronting them with violence means you automatically lose your character. But it's a Cthulhu game, so you're going to have to face Mythos creatures ... you just won't be able to face them. Run from them, maybe try to trap or contain them, what have you ... just don't ever, ever expect to win fights against them.

Earlier this year I wrote about an odd little game I wrote for really, really fast adventure resolution. One element of that game is its monster rating system, something I initially developed for when I run FKR-ish or freeform games. It's a relative ranking system with seven "Force" levels from your setting's weakest to strongest foes (in freeform gaming, it helps me determine whether either side in combat gets an advantage, and how significant that advantage is; it's as much a heuristic device as a numerically mechanical one). Here's how I described it a few months ago:

There are no Warrior Stats for Level 7, because Player Characters max out at Level 6. I may still tweak the Fighting Levels chart, but as initially imagined, you flesh it out by placing peasants, goblins, etc., at Level 1, and then placing the most dangerous kind of opponent possible in your campaign setting as the Level 7 standard. The ratio between the numbers might need to be tweaked from campaign to campaign; the chart above doesn't have a really high power curve, but it's trivially easy to create a higher range by boosting these numbers - or just continuing the scale past Level 7. If I develop these rules any further, that's probably one of the things I'll keep tweaking.

This works well for some campaigns, but it would stumble quickly if I wanted to emulate a more typical D&D campaign's wide range of monster threats. Consider 4e, for example [ALERT / HERESY / ALERT], with its monsters strung across almost 30 levels in three tiers (Adventurer/Heroic/Epic). 13th Age did something similar. Even a freeform evocation of that kind of system arguably calls for a more granular scale.

Now, one way to handle that is brain-smackingly simple: just keep using the extant monster levels (or hit dice for other games) in comparison with character levels. And that's probably the right idea. But I have been struck by an idea, inspired in part by Cthulhu Dark's insta-kill rule and 4e/13th Age's 3-tier system. I think this could be helpful, though maybe this is a solution in search of a problem. You tell me! But I think this could simplify some things while offering a few concrete game benefits.

Across whatever level range your game stretches, divide those levels into three tiers (and call them Adventurer / Heroic / Epic if you want full credit as a filthy heretic). Assign monsters of the various levels to those three tiers.

If you directly engage a monster from a higher tier in combat, you die. Blame your poor life choices and roll up a new character.

If you have advanced into Heroic or Epic tier and you directly engage a foe of a lower tier in combat, you automatically kill or incapacitate that foe.

Or, do you want a slightly more nuanced version?

Advanced Idea & Dragons, 2e: If you engage a higher-tier foe that is just at the bottom of its own tier class, you may fight it, but if it lands a single hit on you, you die. Vice-versa for engaging lesser foes at the very top of the tier below you; you need just one hit to kill them (like 4e minions), but they can fight you.

Now, one possible effect of doing this is that you radically truncate the mechanical ranges needed for a system to work, while retaining the wild, almost bloated power-range of d20 game bestiaries. You need a small range of numbers tailored to your characters' current status in the world. Everything else is beneath them - or way beyond them..."swords are no more use here!" stuff!

Into the Odd's advancement scheme takes you from level 1 to 5. The expectation is that you can retire (most likely) if you make it to level 5 (not likely). The game employs a fairly tight hit point progression for PCs (another d6 per level, if I recall correctly). The game also offers hardly any leveling-up mechanical benefits beyond hit points, though there's an expectation that in-play circumstances will be changing your character diegetically.

I'm imagining a triple Into the Odd campaign, but with some extra class benefits.

Run to level 5 as normal - using 'Adventurer' scale monsters as the primary threats (though feel free to throw in higher beasties too, and telegraph that the characters need to run away in terror).

If someone makes it to level 5, they can level up to 6 - or, rather, "Heroic level 1" - reset their hit points as a level 1 character. Only, now, they're mostly immune to Adventurer-tier threats. If they live long enough toe make it to Epic tier, they will once again drop down from 5 or 6d6 hit points to 1d6 hit points - but this time, they'll be functionally immune to Adventurer AND Heroic-tier threats, and they will be sweating bullets in their initial encounters with cosmos-shaking Epic-tier threats.

One complaint often lodged against 4e D&D is that the levels go up and up but the hyper-balanced combats create a kind of treadmill feeling; you're always slogging away with relatively similar threat levels.

In the version I'm suggesting here, instead, you have a meaningful progression from zero to hero at EACH tier level, followed by a period of fresh terror as you learn to navigate the threats of a whole new tier of adventure.

Huh. I'm sorta spitballing here, but I kind of think this idea could have some potential, whether for Into the Odd or some other rules-light system. Has it been done before? It seems so simple that I assume someone's tried this before. Any thought/experiences, o gentle reader?

TAKE THAT! Another drawing, and another sale

At it again! I am really trying to get a bit more drawing in these days. I've always enjoyed it, and I suppose I entertain dreams of illustrating my own hobby work someday. I'm in a funny place of being keenly aware of how much I need to improve, while enjoying signs of improvement as I go.

For today's figure, I wanted something with more dynamic movement than in my previous (hobgoblin) picture. This guy is bonkers anachronistic - the pants and shin ties are medieval Russian, the round chest-plate is from Iron Age Spain, and I guess the cape is straight DC comics. A perfect fit for the average D&D session, then. :-) Anyway, I had fun making this fella.

Meanwhile - while you're here, please note that DriveThruRPG.com has a big sale running on indie game products. My Brazen Backgrounds (Bronze Age character background generator) and Hunters & Highwaymen (30 interesting NPC encounters for the dark woods or the taverns in them) are both on sale (note: affiliate links), as are many, many good and helpful products by small-press authors and designers. For example, I just picked up Kent David Kelly's CASTLE OLDSKULL - The Book of Dungeon Traps, which looks like it may offer a helpfully different approach to traps tailored for different party levels (another affiliate link).

Thanks for all the support! Happy Gaming!

I am trying to get better at drawing figures. I recently slapped out an orcy/hobgobliny figure in a few minutes, and thought it was decent, but recognized that a better anatomical awareness would have helped. Enter the magic of "Magic Poser" (what a name!), a nice free online tool for posing anatomical figures for sketching. Today I tried again. The page isn't cleaned up (you can see some erased earlier marks and what-not below) but I like this fella. Well, I'm not sure I'd invite him to my next picnic, but... 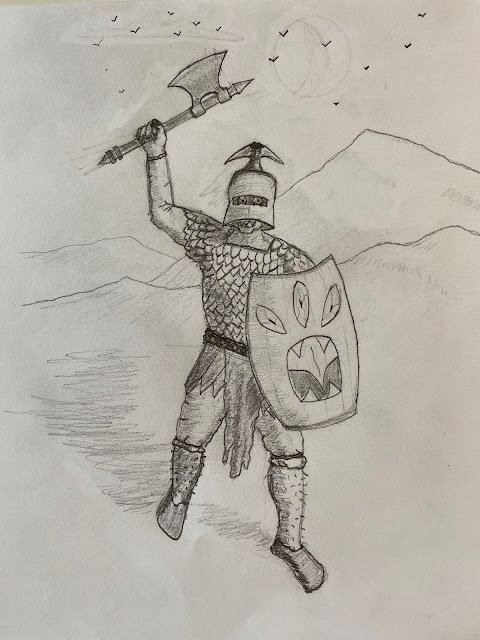