Warhammer, Scratch-Built & Kitbashed - from a Deodorant Hovertank to "Chaos Stormcast" (!?!)

Geeky readers of a certain age - those who cut their teeth long ago on the OG, first edition Rogue Trader 40k rulebook - may remember a time when White Dwarf encouraged players to build their own vehicles from parts at home! I remember reading about the 'deodorant stick hovertank' back as a teenager, and this ludicrous, brilliant idea lodged itself firmly on my hobbyist bucket list. 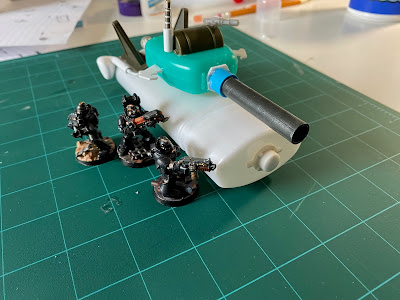 My kids and I like to play 40k (when I say "play 40k," let the reader be wise and understand: why bother with endless codex updates and complex rules when you can run your grimdark platoon- through fire-team-size fights more simply with Squad Hammer, Space Weirdos, the various One Page Rules systems, etc.?). To support our ongoing shenanigans, I decided to throw together a fighting vehicle suitable for use by pirates, rebels, or down-on-their-luck planetary defense forces. Something a bit ramshackle, with a 'Russian Civil War, but in space' vibe, would be just right. 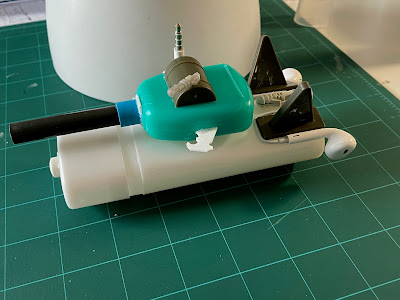 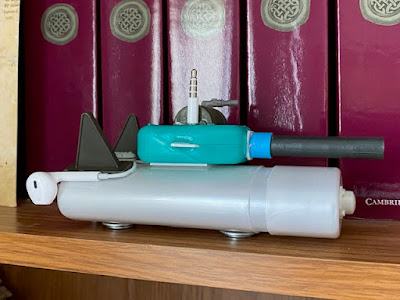 I may add a few more cosmetic doohickies to the fuselage, but it's pretty much done. Of course, it needs paint, but "Spraypaint with adequate ventilation" and "January in Canada" are not optimally paired, so we'll see how soon I can get that done. I'm imagining a stripey camouflage pattern with local highlights thereafter.

This was fun to put together! It is, quite literally, pieces of junk. The fuselage is an empty deodorant canister. The fins were plastic signs from a 'green army men' set (they had stickers with 'no entry' warnings or something like that). The "aft attitudinal-stabilizer nacelles" and their fuel lines are, of course, Apple headphone earbuds! I had an old set giving up the ghost that I just replaced, and I decided in an odd fit of inspiration to cut them up for the bits box. The turret is a floss box; the main gun was the plastic tube holding together a roll of dog-poo collection sacks (!). The little blue bushing around the gun barrel was a spool inside the floss container. Atop the turret are more pieces from the army men set, and the power plug from those headphones as a rather robust antenna. The sort of mandible-shaped fins 'welded' to the turret's sides are meant to add a bit of menace but also unprofessionalism to what I imagined might be, again, a pirates' vehicle. Those 'fins' are just bits of a plastic bread-bag closure tab. :-)

We will have to see, but I've high hopes that once painted up properly this will do the space-scum proud, and satisfactorily mark the deodorant hovertank off my bucket list.

I BASH, YOU BASH, EVERYBODY KITBASH...

In the top photo above, the three infantrymen in position near the tank are part of a four-man kitbashed fire team of which I'm quite fond. I don't think they're particularly clear in that photo - it's just detailed enough to show you that I'm no great painter - but you may be able to pick out their essential elements. I wanted to make some tough-looking troops who might be pirates, private security, etc. I used Chaos Space Marine bodies with no shoulder pads and no backpacks. I added Skitarii Vanguard helmets and a few parts crafted from plasticard or clipped from other GW bits (the fellow firing one-handed in front has a comm-unit or perhaps a detonator in his left hand; it was formerly just one of the doodads hanging from a Skitarii backpack).

FOR ORDER AND GOODNESS, DOGS OF CHAOS! WAIT, WHAT NOW?!?

Next up on the topic of kitbashing is something I can't take any credit for, but wanted to share. My FLGS runs a nice cabinet for re-selling used miniatures. This past Christmas, I acquired a really interesting collection of kitbashed Warriors of Chaos. In a nutshell, they combine parts from Stormcast Eternals ("good guys") and Warriors of Chaos ("baddies"), though as you'll see below there's more to it than that.

First up, some cavalry: 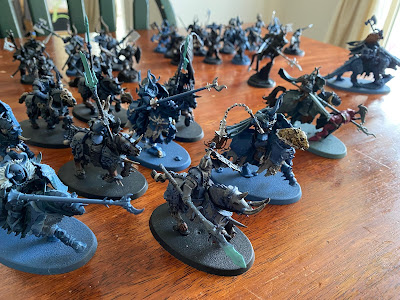 Alright, that's Chaos-y...but check out that fella toward the back! 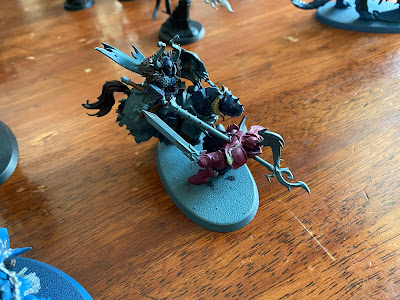 It's been made up almost like a little diorama: a charging Chaos Knight has impaled a falling Stormcast Eternal on his lance. Now, let the record show that this is a highly improbable lance-head for stabbing into plate armor, but otherwise, this is quirky and cool.
Check out the general: 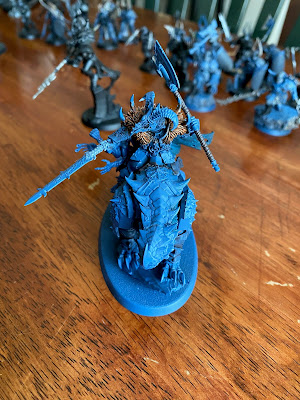 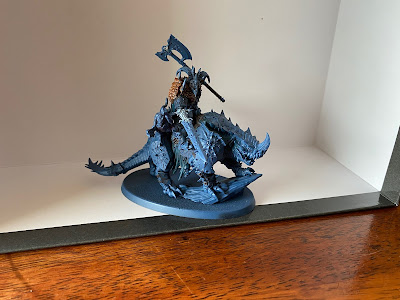 This guy's got some kind of Beastman helm or head, and there's an imp riding shotgun behind him.
The modifications get more aggressive with the infantry. This fella, for example, appears to be a Stormcast Eternal, but with a Kroot Carnivore's head from 40k: 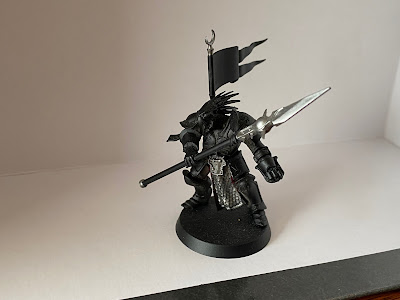 I believe this next one combines Stormcast parts with bits from the Tzeentchian variety of beastman: 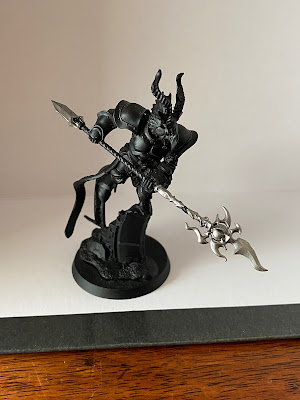 Some of "the boiz" are more straightforward mixtures - Stormcast Eternals bodies with Chaotic helms and, sometimes, weapons: 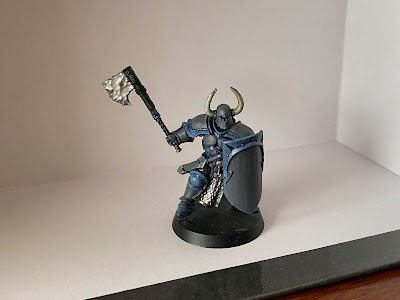 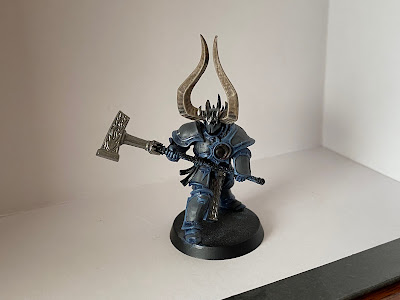 I find this a really interesting vibe. They definitely still read "bad guys" - but the use of orderly Stormcast parts moves things away somewhat from the normal "chaotic evil edgelord" feeling of Chaos Warriors. I almost imagine these guys like Pathfinder Hellknights - who are lawful evil! In fact, these guys make me want to come up with backstories about once-noble knights who fell into error as antipaladins through their own pride and hubris...but who probably still think they're the good guys.
On the other hand...I call this guy the Mouth of Sauron. 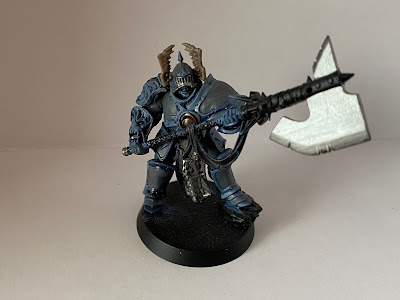 If he was ever a nice guy, it was - oh, like way back in 2020 or something.
Some other figures in the lot are more typical Chaos Warriors, but they're still kitbashed in interesting ways. This fella, for example, has a trident for a left hand. 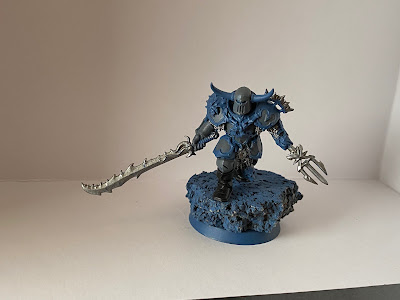 And, bringing in a dash of science fantasy, here's a Chaos Warrior with a giant mechanical prosthetic hand. I've been trying to figure out what kind of part was used - it has a Necron-ish look to it - but I haven't figured it out yet. Any idea? 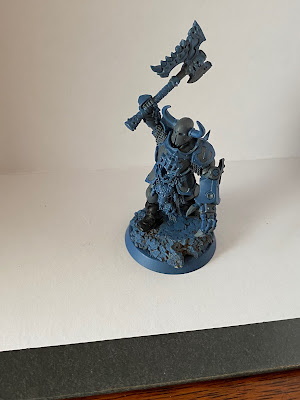 ANYWAY - These are some leading examples from within the batch. Just a final shot of some of the gang together... 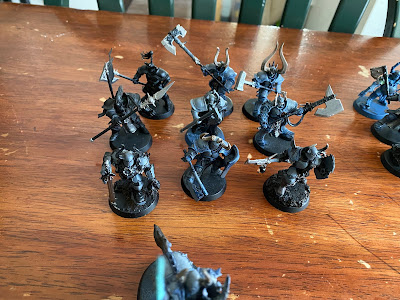 I'm really pleased to have got my hands on such a quirky warband with so much personality. In general, I find kitbashing really fun, and seeing someone else's handiwork is inspiring.

Thanks for checking out the kitbash gallery! And speaking of Warhammer, I'm mid-draft in the second half of my Soulbound RPG review, and have plenty of other stuff I may talk about soon, too - so stay tuned. Happy gaming!