A Miscellany: Engaging the FKR, more on DOMAIN Play, and a rather different GREYHAWK

First: my sincere thanks to all who've purchased my newest, recent publication on DTRPG, Hunters & Highwaymen, which I discussed here. I hope it's earning its place on your hard drives and at your tables! In other news, I feel like I have many gaming-related things to comment on these days, and perhaps a miscellaneous post broaching several of them is in order. To wit:

Well, I've gone and done it. I've become a fan of games run in a Free Kriegsspiel-inspired manner.

If you haven't a clue what I'm talking about, hang tight for a sec. If you do know but you're sure this isn't for you, then you're right where I was a few months ago (yes, that certainly sounds like a recent convert to a cult). 🙈 When 19th-century military staff officers in Prussia wanted to make professional military wargaming more effective and straightforward, they ('they' being the dapperly-named General Julius von Verdy du Vernois) chucked out most of the rules-bloat ("crunch") in exchange for trust in a veteran referee's judgment-calls. This produced a much faster, more intuitive, and more conversational approach to officers' training. It worked so well that it caught on eventually with military staff in other nations, so that the Free Kriegsspiel approach became part of the wargaming conversation in the English-speaking world in the 20th century...including, eventually, the recreational wargaming world. From there, it was an important part of the DNA of games that led to Weseley's Braunstein, Arneson's Blackmoor, and Gygax's Dungeons & Dragons (Which is a thing. Perhaps you've heard of it). Since the 1970s, however, RPGs have fluctuated back and forth (just as professional military wargaming had done earlier) between 'crunchy' and 'freeform' poles.

Fast forward to 2021. There are still some old grognards and first-generation roleplayers who never stopped playing the Free Kriegsspiel way, and there are a bunch of yunger'uns like me who are just now realizing its great potential (FKR means "Free Kriegsspiel Revolution" - it's a comeback, see?). HERE is one gateway for more information. There's a very robust Discord community hashing through this stuff, too. I'm not going to type out a complete who-what-how thing here, but if this sparks interest, I'm happy to engage the topic in more detail on this blog.

I've quite caught the bug, going really freeform: no hit points, even. I ran a one-shot over zoom last weekend with characters that looked like this:

You're a paladin. You have good fighting skills, full armor, a sword and shield - and you can choose either the ability to try healing wounds through prayer, or to try turning the undead. Oh, and you have any 3 standard adventuring supplies.

Bingo. That's a full character sheet. Again, this was for a quick one-shot, so you can absolutely develop characters quite a bit more (and I have done recently), but this gets the job done. In combat with a dozen two-foot-tall clay shabti-warriors and a much larger rope-golem inside a tomb, one character (a battle-rager) took a nasty slash across the bicep, another (a humanoid living star) got stabbed in the leg, an enchanter managed to sing to the elements in the tomb's rock-wall persuasively enough that the rock bulged out and entrapped the golem, the critters were defeated, and the paladin juuuust managed to see her allies healed. None of this, again, involved hit points, or a complicated magic system, or such a thing as 'armor class'. It did involve dice rolls, and a real system, but it was a tremendously bare-bones system that had to rely mostly on my own judgment as GM about which situations were more or less favorable to players.

And it was great. I've been running all my games this way for the past month or so, and am quite enjoying the liberation of the experience. I'm honestly not certain that I would have been much good at this when I was a less-experienced GM. The no-HP thing is my own extreme, however; many FKR GMs still use hit points. To each their own.

My point? This is a thing. It sounds...bizarre, flakey, gimmicky, and primitively underdeveloped, at first. But it's actually quite potent and liberating.

Last year, I wrote a series of posts (for example: this one) about streamlined, simpler ways to run Domain-level play - that aspect of gaming in which PCs can command military units, build strongholds, fight wars, and make even more ado about themselves than usual. I messed around with some ideas - some not too shabby ideas, I think - about hacking Into the Odd, Dungeon World/Apocalypse World, etc.

Over at the Knight at the Opera blog, writer DwizKhalifa recently has run their own series of posts about domain play. I commend them to you. One such post offers an interesting introduction to the world of, believe it or not, Model United Nations and crisis simulation as a game-able paradigm for thinking about domain activities in RPGs. I will be honest: wouldn't have expected that to be a clear fit...but wow...it's REALLY a great model for handling domain play! And - well slap me silly - I have to say that it is, to all intents and purposes, a slightly-different expression of the same principles behind (the Mouat style of) Matrix games and also Free Kriegsspiel!

Time loop. Didn't you just finish reading the Free Kriegsspiel section of this post? No, not really, because it turns out that the freeform approach is applicable to darn near every aspect of gaming. This is not actually innovative; I shouldn't be surprised. Gamers were using exactly these kinds of low-crunch, high-judgment techniques at the dawn of our hobby. Last May, reader u/steveg pointed out to me in a comment that some of the rules-light domain techniques I was experimenting with evoked practices used in the Empire of the Petal Throne games, or in the narrative wargaming of Tony Bath's classic Hyboria campaign (which didn't mean much to me last May, but after reading up on, it: WOW).

So, what's my point here? It's that, uh, yeah, it turns out that really, really freeform management systems for running the domain game have been around since the dawn of RPGs - and, instead of offering a clunky, inelegant, and abstract substitute for a really detailed simulation, they can lead to wonderfully deep and tactical/strategic engagements. My favorite example so far: from Tony Bath's old Hyboria campaign - one player was concerned about a potential rival's construction of a naval fleet, but didn't want to openly provoke hostilities. So he asked Bath whether he could arrange an 'accident' - merchant ships sinking [scuttling!] right at the mouth of the rival's harbor, blocking their port for the near future! Bath agreed, came up with a range of likely results, and then rolled the dice...

I recently diverted some of my ill-gotten gains (thank you, again, dear Hunters & Highwaymen purchasers!) to make a purchase of my own from DriveThru - I picked up .pdf copies of two old TSR setting box sets. One was the original 1e 'gray box' Forgotten Realms set (affiliate link). I had it as a youngster - this is, I will admit, largely just a nostalgia move, but it's quite fun to look through it again (take away the bloated canonical narratives and the endless official Elminster fanboyism, and the original Realms were a pretty cool place to imagine). I also wanted to grab the old Greyhawk boxed set - the one with the charging knights on the box cover - which I also had and pored over in my teenage years. But...I just wasn't sure it was what I was after.

And then I discovered something quite interesting: Greyhawk: From the Ashes. (affiliate link)

This is also a box set (albeit in .pdf). This also features a really sweet 'Darlene' map of the Greyhawk setting. But it's set later, after the 'Greyhawk wars' that did a lot to change the setting. I think I was only ever vaguely aware of this thing; inquiring online, one can encounter a ton of griping about the changes made to the setting (for example, the Scarlet Brotherhood has gone overt and massively expanded their power; some of the 'good guy' kingdoms have fallen or are in serious trouble).

I don't really have much personal investment in a specific point in Greyhawk history, but I do want a reallly fun and really useful product in return for purchase. And - wow, I've gotta say, this thing looks awesome! It's Greyhawk, as I used to know it, only everything has been turned topsy-turvy because of the recent war. It's a grimmer version of the setting, but also a more dynamic setting that looks more open for GM ideas and players who want to make a dent of their own. To be honest, I've only just started dipping into the files that came with the purchase, but I can already say that it is absolutely loaded to the gills with cool ideas for adventure, including a setting sourcebook that could actually launch a bunch of play sessions and not just offer complicated background fluff. My initial hot take is that whereas endless narrative progress eventually made the Forgotten Realms less suited for unique adventurers with their own agency, this product looks even better than what I remember of the Greyhawk set for the 'classic' era. 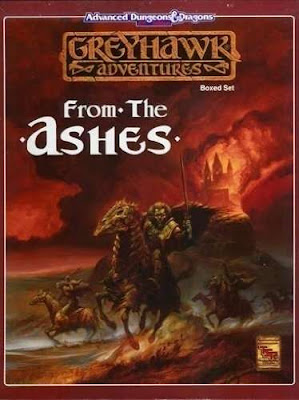 Anyway. Who knew? It hurts my NG-CG-aligned heart to see that iconic castle in flames on the cover, but the stuff between the covers is really good.

That's all for now. Thanks for reading, and happy gaming!