In a recent post, I reported briefly on a very enjoyable PbtA session filled with all manner of player hijinks, loosely inspired by the Dark Sun setting. It involved, as I stated there, essentially the World of Dungeons rules-light system, "beefed up with some really evocative playbook moves plundered from various Apocalypse World hacks to add some gritty swords-and-sorcery color." As I noted in my previous post, there are already some PbtA hacks that do this, but none of them hit quite the tone I was looking for: simple and straightforward to run, yet with evocative, interesting, and dangerous characters, and without leaning toward the sleazier stuff that a lot of S&S fiction/gaming evokes.

Anyway, that one session turned into a three-session mini-campaign with my adult gaming group that was uproariously fun and (not counting the time to put the initial playbooks together) also really low-prep to run as a GM. The players ended up breaking out of prison after being wrongly suspected of a kidnapping, usurping control of a cult, using the cult members as extra muscle, and forging an alliance with a group of sentient ape-man warriors guarding an urban shrine with a relic hammer capable of preventing a Sorcerer-King's return from the grave. Complicating matters were the cultists dominating the city council who sought to expedite said tyrant's return, the shadow-walking inhumans with mind-controlled people puppets, and a mummy very unwilling to have its gilded skull destroyed (such destruction, using the relic hammer, was also necessary to prevent the Sorcerer-King's return). There was a huge and bloody rumble in a pepper-pigment-processing bazaar, and a dramatic finale at the ape-man shrine. Oh, and one of the PCs even shape-shifted into a pterodactyl. Yep. Finally, after many shenanigans and much laughter, a PC made the ultimate sacrifice to stop the villains, saving the day (but losing his life) in the final dice-roll of the campaign. Great stuff.

Anyway - an anonymous commenter asked for more info on the way I set up the playbooks. I figured I'd dump everything here and let those who like the sound of this take a closer look. Please note that while I synthesized these parts myself, the individual parts are all taken from or at least inspired by different existing PbtA resources by other creatives; there are bits and/or traces herein from Apocalypse World, Apocalypse World: Burned Over, Apocalypse World: Fallen Empires, Dungeon World, World of Dungeons, Advanced World of Dungeons, some online Conan PbtA resources (Hyborian Age, and also Road of Kings, I believe), and World of Pilgrims, and I had been thinking a lot about One Shot World and Homebrew World, too.

Voici. Pardon the lame working title. Here is World of Swords & Subtlety. [CLICK ON THE PICTURE FOR .PDF] 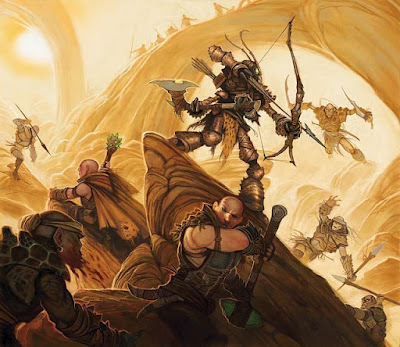