This post reports on my new home campaign (a sandbox combining The Evils of Illmire with The Black Wyrm of Brandonsford), plus a comment on the enjoyable tension of GMing a hexmap with deliberate gaps.

Please note: this post will contain SIGNIFICANT SPOILERS for both of those (excellent) published adventures. If you are a player and you read this, you will be sad, and you will lose all hope and reason to continue, and you will end your days wishing you had heeded my warnings.

My latest home campaign is off to a rousing start. For rules/system, I'm using Knave as a chassis, supplemented by some serious house-ruling to shoehorn classes back into the game.

I knew I wanted to run a sandbox/hexcrawl, but I've been burned in the past by my own tendency to over-plan. Various grognards on Ye Interwebs preach the good word of starting small. What do they know? Grumble, grumble...Oh wait, they DO know. Last time I was asked to plan a sandbox (for my kids), I toiled over an artisanally-designed campaign setting, poring over different adventures to seed across the map, etc., etc. Well, we ran one (very enjoyable) session in that campaign...and then it died.

But we learn. We grow. We try not to repeat the same mistakes.

This time, I combined several useful assets. First, the cold voice of experience. Second: two really great indie sandbox modules, The Evils of Illmire and The Black Wyrm of Brandonsford (I've reviewed the latter here on the blog, and it has since received some updates, making it even stronger). [Oh - all DriveThru product links on this post are affiliate links, by the way - using them helps support this blog's activities at no added cost to you. Thank you!). Illmire is a compact but really packed hexcrawl involving a sinister cult afflicting a village ... though it turns out the cult is just the tip of the iceberg of what's going on in the region. Brandonsford is much smaller - the adventure's map scale allows the entire thing to fit in one 6-mile hex.

So, for my new campaign, I decided to slap both microregions down near each other, and just let my players romp in a points-of-light sandbox.

It's been REALLY GOOD so far.

WILL THE REAL CULT LEADERS PLEASE STAND UP?

We started with a Witcher-inspired campaign concept. The players are "Claws" - monster-hunters born with a birthmark indicating their membership in a strange group predisposed to adventure and well-equipped with the requisite competencies. Boom, instant reason to adventure together. I'm granting XP ONLY for treasure collected (though I use silver rather than gold as the standard).

To kick off the campaign, I gave them a quick overview of the campaign area (in very sketchy detail) and offered three job hooks: go answer a covert plea for help from the Lord Mayor of Illmire, answer an open call for Claws from the leader of a logging camp near Illmire, or go check out these rumors of a dragon disrupting highway traffic near Brandonsford, further East.

The players decided to start right in Illmire. They met the mayor, quickly realized things weren't right in town, accepted a mission to check out the nearby watchtower, had a bloodbath of a fight with the bandits posing as legit guards there, and wisely ran away from fighting the giant hideous awfulbeast in the basement. The strongest PC got knocked out twice on that mission - ah, the delights of old-school play.

Then, back in town, the players learned more about the doings of the sinister cult afflicting the area, started freeing some locals from mind-control, and finally launched an assault on the cult's center of operations. Now the local cult leader is dead and the cultists have been driven out of town (for now), though one PC lost his left arm below the elbow...ah, the delights of old-school play. (Actually, the PC should have died, by rights, but I allow the "last stand" and "terrible bargain" death houserules from this juicy post on Boxfullofboxes).

Then, the players went to check on a weird circus encamped near the town, en route to go hire out to the logging-camp leader. Here is my first modification to Illmire's basic structure. Esmeraldra, fortune-teller at the circus, is already described as an ancient sorceress secretly rivalling the Observer, who is sort of the ultimate power behind the scenes in Illmire. I have decided that the Observer was once a human mage-prince who accidentally fused himself with an interplanar being, and thus went mad - explaining his Beholder-shape now - and Esmeralda's real name is Smaragdia...she was the Observer's queen. So the war between them was a civil war between former lovers. The Witch in nearby Brandonsford, I've decided, was one of the witches who helped Smaragdia resist the mage-prince, so that will be a potential string tying the regions together, too. Smaragdia/Esmeralda has begun cultivating the PCs as agents; if they survive and keep working with her, she'll try to get them to storm her former citadel and take out the demons imprisoned there - I've decided that Smaragdia's main power has been locked down in the need to maintain that prison. In other words, if the PCs do 'solve' that problem, the grateful Smaragdia will be able to seize all her old power. What could possibly go wrong?

The players can tell Esmeralda is something much more interesting than a random fortune-teller, but they don't know her backstory yet. Well, as of this past session, the players accepted a potion of underwater breathing from her, and have been using it to try to solve the Fishmen problem in the lake west of Illmire. To their credit, they tried hard to find a diplomatic solution, and eventually prevailed in talking sense into the fishman chieftain despite several flare-ups with the reaction rolls/dice. Now, they've just made a deal to spend 24 hours trying to figure out how to cure the cursed fishmen, before they get driven off again.

And so, onward. I'm having lots of fun!

The hexmap below shows how I've joined up the two published adventures' campaign regions, and situated them within a larger area. South of Illmire, there are two rival 'noble' territories at loggerheads with each other (I thinly sketched out their leaders' personalities using the tables in WFRP's Border Kingdoms guide). "Halfway House" is a fortified inn; "Longbridge" is an interesting settlement detailed in a Raging Swan village background settlement, torn between the nearby feuding powers. 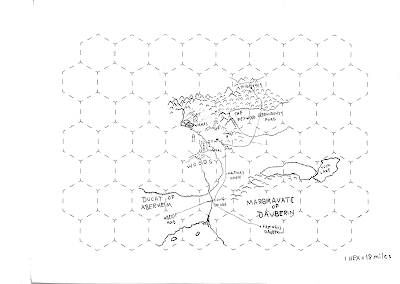 My normal instinct would be to go hog-wild and immediately fill in all those blank hexes. I have resolved not to do so unless I actually need to. Rather than repeating my earlier habits of over-preparation, this allows me to focus my energies on the already rich resources in the two published modules, while dangling some tantalizing question marks in front of myself. I have added an additional campaign baddie - a sinister noble warlord named Sir Volter Costanze, who I've decided sent the OG Illmire cult leaders into the region to begin with, before they betrayed and abandoned him. But I'm not really sure who Costanze is or what his agenda will be. And I don't need to find out until he becomes more relevant.

Are there whole kingdoms across the mountains? Howling wastelands? Lands of tyranny and death, or urbane cosmopolitan cities? Who knows! Not me! Not yet!

I'm really enjoying the sense of creative freedom and promise, but also restraint and discipline, in NOT fleshing out everything on my map. I realize that for many of you, this is just a "well, DUH!" insight, but it's been important and rewarding for me to implement.