Warhammer: Age of the Valar (a thought experiment - Sauron as Tzeentch, etc.)

EVEN THE SMALLEST FAN-FIC CAN CHANGE MIDDLE EARTH

LOTR and the Silmarillion are back on my mind, what with the Amazon hubbub and whatnot; and Warhammer is usually on my mind in one way or another. So here's a mash-up thought experiment just as a bit of fun (besides, it's a nice break between formatting course syllabi...). Consulting Google, I am unsurprised to see that others have put "Middle Earth and Warhammer/Sauron and Chaos Gods" in the same box before, but let's see what I can come up with here for a fun twist. Or, I dunno, just file this under sad fan-fic and move on. :-)

In the First Age of Middle Earth, the Chaotic Enemy was one, though it bore many names - among them Melkor and Morgoth. Yet Morgoth did not fight alone - the Chaos Lord commanded a vast host of beastmen, balrogs, fire-drakes, and - worst of all - his thrice-thirteen champions, the Thirty-Nine Grand Agents of Chaos. But after an age of horror, the Valar marched against Morgoth's hold; the Chaotic enemy was cast down into the void, his forces scattered. The Valar returned home, westward.

The Second Age seemed at first a Golden Age, an untroubled time of wise scholars and wealthy merchants linking Human, Elven, and Dwarven halls across Arda - even unto the royal isle-citadels of Numenor. But the taint of Chaos remained. For, though Morgoth still lies bound in the void, his Grand Agents cannot truly be slain while in this world; when a Grand Agent is destroyed, the chaotic energy that endowed it merely flees howling into the wastes for seven centuries, but can then return, always seeking a fitting new champion to empower. Thus the most dreadful of Morgoth's servants emerged again to sow deceit, division, and death - seeding dark cults that swayed the Numenoreans, and raising dire strongholds  to wrest the mastery of Middle Earth. Again the Valar reached forth; they thrust Numenor beneath the waves and Bent the world. Cut off from the Undying Lands, the Lords of Chaos turned on each other. At the foot of Mount Doom, an avatar of Nurgle beheaded Sauron's corporeal form and stole his neck-torque (though he did not know the torque's secrets, and thus could not imprison Sauron's wraith). Thereafter, the desperate Last Alliance of elves and men confronted the Pox-Lord and cast down his diseased towers. Many elves then fled westward from mortal realms, and the Second Age came to an end.

Now is the Third Age. What even the wise long tried to deny now cannot be ignored: the Grand Agents of Chaos have returned in force again.

FORCES OF CHAOS IN MIDDLE EARTH 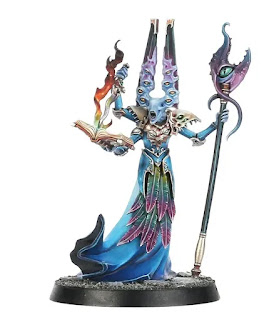 Among the mightiest and craftiest of the Grand Agents of Chaos, he is called by many names - Sauron, Tzeentch, the Lord of Change, the Deceiver, the Father of Lies. From his stronghold in Mordor, Sauron threatens all free peoples nearby - though he also schemes to steal power from his chaotic rivals. His armies are dreadful, but equally dangerous are the hidden sorcerous cults and cabals that serve him in the shadows of most kingdoms. Gonder and Harad are particularly vulnerable to his influence; Umbar has even declared openly for him. 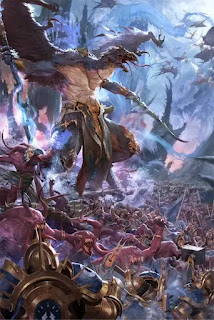 Long ago, aided by deceived Noldor smiths, Sauron forged a terrifyingly powerful neck torque. Its wearer - if the proper spells are known - can capture the energy of a slain Grand Agent of Chaos, preventing its exile in the wastes, trapping the energy within the torque and making it available as raw power in the service of the torque-bearer. The wise fear that thirteen such Agents already lie trapped within the torque. The torque has been lost since the end of the Second Age, but Sauron's cultic agents tirelessly scour the world's dark places in search of the relic. If found by the powers of Order, perhaps the torque could be turned against Chaos - but its true loyalty is to Sauron, and its seductive appeal is profound. Or, the torque could be destroyed, if dipped into the fresh blood of Sauron's current corporeal form - but who would dare bring the torque into Sauron's own presence, even if under arms?

Nurgle, the Plague-King of Angmar, is strongest where minds turn most to thoughts of growth, fertility, fecundity, and the needs of the earth. Though Nurgle-fed pox threatens any dense city on Arda, Nurgle's servants are found more commonly in the countryside. Though few noticed when the lovely Shire almost fell to a Nurgling cult led by the pox-priest Bubo Baggins (I'm really sorry, I couldn't resist...), the prospect of great Ents seduced by Chaos is more disturbing; and the inner copses of Mirkwood are haunted by huge, bloated, pustulent spiders. Every year, the elves of Lothlorien must patrol their borders and cull, weeping, any trees seeded by Nurgle's taint.

Saruman, Nagash, the Bone-White, the Necromancer, Old Sharkey - this Grand Agent of Chaos was among the wisest and (it was believed) the most virtuous of Order's heroes, until he accepted a dark bargain and became the latest avatar to the chaotic energy associated with death-magic. Now, he rules a kingdom marked by no borders but the grave - barrow-wights answer his call in the northwest, tomb-lurkers in Far Harad heed his will, and (the sea-elves say) even drowned legions beneath the sea march at his command.

TBH, I'm not hugely into the current style of Warhammer Dwarves (especially the Fyreslayer dudes, which I've described before as "guys at a nude beach in an Asterix comic." Bring back the classic dwarves, I say - and that means Chaos Dwarves, too! 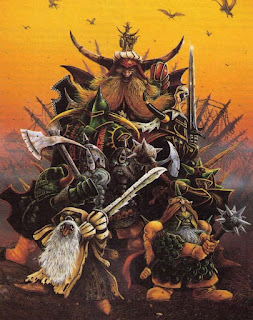 In the Grey Mountains, the northern Misty Mountains, and the Iron Hills, some dwarf-lords have yielded to Chaos' temptations, and now threaten neighbors in every direction. Fortunately (for the Free Peoples), the reconquest of strongholds at Gundabad and Khazad-Dum occupies much of these foes' attention.

Let's assume that there are no Orcs in this vision. Nope, don't need 'em - plenty of beastmen, tzaangors, ogres, trolls, giants, wolves, undead, and human cultists around to cause trouble. Or, if you insist, we'll call GW-style orcs/orks/orruks "funny-looking green beastmen."

FORCES OF ORDER IN MIDDLE EARTH

Ever since the Valar Bent the world, travel to and from the Undying Lands is a dire undertaking. To travel to those lands is usually a one-way ticket; to travel from them is an even greater undertaking.

The Stormcast are a host of penitent immortal elves, already home in the Undying Lands, who took pity on the kindreds left behind to face Chaos during the Third Age. With the grudging consent of the Valar, the Stormcast project their being from the Undying Halls into Middle Earth, riding lightning bolts that carry the likeness of their will and form. The Stormcast cannot truly be slain, for their actual being remains in the Uttermost West; but with each death in battle and re-projection, it becomes possible to send less and less of the fighter to aid Middle Earth. Thus, Stormcast might fight in a hundred battles for the cause of Order, yet seem to lose more and more of themselves each time. Whether such ordeals can touch the wellbeing of the elves at their source in the West, not even the wise know. 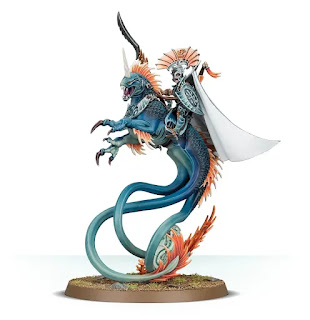 Set by the Valar as wardens upon the sea, the Deep Elves' task is to ensure that any chaotic secrets drowned in the downfall of Numenor stay that way. Empowered by the Valar to patrol a watery realm, the Deep Elves are seen only rarely on Middle Earth. At times, however, they return to the surface, clad in mystical water-pockets, joining with allies to fight against Chaos. There are those, however, who whisper that even the Deep Elves themselves could be tempted by darkness - or that their true purpose might be to hunt the ancient Silmarils cast into the depths long ago...