Blade-Binds in the Bronze Age (!) and the mechanics of cultural fighting styles

Are you interested in Bronze Age archaeology? Are you interested in sword-fighting? Wanna talk about making it all game-able? For the four and a half people globally who are nerdy in exactly the same ways I am, this is mindblowing: I've just skimmed through a new article from the Journal of Archaeological Method and Theory (Hermann et al 2020) that argues...well, I'll get to that. If you want the skinny version, you can also read a shorter essay explaining the hullabaloo here: "Sword-Wielding Scientists Show How Ancient Fighting Techniques Spread across Bronze Age Europe." 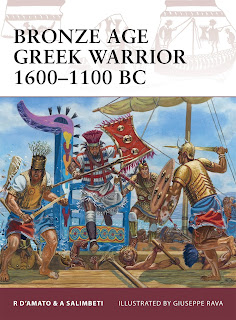 But first, dear reader, an interlude to set the stage. If you follow the world of what is often called HEMA (Historical European Martial Arts) or if you have ever done any longsword or sword-and-buckler training based on authentic medieval manuscripts, you presumably know about blade-binding. For those who don't follow those worlds, blade-binding is an essential technique for controlling and advantageously (out-)maneuvering an opponent's blade while also sensing their tactical intentions. It provides a foundation for the other highly-sophisticated techniques of medieval swordsmanship, in which combat looks nothing like the wild swings and blocks of Hollywood, but instead something like this.


That, and the next linked videos, are all by the esteemed Roland Warzecha (Dimicator), a leading HEMA authority (particulary for sword-and-buckler play) who collaborates with museum and experimental-archaeology researchers in Germany. You can find him explaining some aspects of binding with swords here and here.

Now, here's the kicker: as Roland describes visually here (jump to about 9:50 if you're in a hurry), changes in the physical design of Viking/Carolingian swords appear to reflect a shift away from shield-binding and toward a new approach - blade-binding. That is to say that blade-binding as used in the written medieval fighting treatises was (in the big picture) relatively new (i.e. only a few centuries old), and revolutionary.

Ok. Now back to the Bronze Age. The new article (linked at top, above) by Hermann et al. reports on a detailed study by the Bronze Age Combat Project, a research venture combining experimental archaeology, trained swordsmanship, and archaeometric laboratory analysis. In a nutshell, here's what the authors have done. They procured high-quality replicas of swords from the European Bronze Age; practiced a variety of controlled strikes with/on those swords, then took those swords to a lab, and studied the ways different kinds of impacts affected the blades; then they gave further bronze swords to fighters skilled in a particular HEMA method of European swordsmanship (Lignitzer on sword-and-buckler), had them execute short bursts of combat techniques, and then, again, took the blades to the lab to understand how such techniques would affect the location, size, and type of marks left on bronze blades.

Then - and here's the kicker - they compared their results to the archaeological record, reverse-engineering the marks found on authentic prehistoric European bronze blades to see which kinds of strikes would have produced the marks we actually find on the ancient blades. And here's what they learned...in their own words:


Firstly, the research has identified several types of diagnostic and undiagnostic combat marks on prehistoric bronze swords and has interpreted them in light of the experimental tests. This has fulfilled, if perhaps partly, one of the project’s main objectives, which was to link distinctive combat marks with specific uses of the weapons. Secondly, it has elucidated how Bronze Age swords may have been held and operated, and the degree of skill and training required in their proficient handling. Thirdly, it has overturned previous assumptions concerning the alternating attacking and defending stances that—it is often posited—would characterise prehistoric swordplay, while also disproving scholarly claims that early fencers would avoid blade-on-blade contact to preserve their weapons. On the contrary, the research has demonstrated that Bronze Age fighters would deliberately seek contact with their foes’ swords in order to stifle and control them. Not only is this a significant advance in its own right, but it also provides a convincing explanation for the plethora of wear marks found on archaeological swords, as well as much-needed analytical diagnostics for discriminating between combat and deliberate destruction marks...


As the rest of their article makes clear, they have discovered that blade-binding was developed thousands of years ago and had spread across much of Europe before the end of the Bronze Age, working as part of a coherent system of sophisticated swordsmanship that would have required coherent and regular training by sword-fighters. Moreover, they can track the spread and then the end of such techniques over space and time. Archaeologically, this is super cool (to use a technical description :-).

Ok, Capt. Nerdfest, but what about the games?

Sure. Stick with me.

Let me (briefly) discuss three possible insights for applying this at the gaming table, like in (Oh, I dunno, fer instance) a sword-and-sorcery game using my Brazen Backgrounds: Character Backgrounds for Bronze Age Settings (that's an affiliate link).

1) Prehistoric "Fighters" are legit. As this new research reminds us, martial cultures are capable of producing highly sophisticated fighters whose abilities would overwhelm those of less-sophisticated combatants, and such cultures of violent technique were present in many prehistoric contexts. You don't have to wait around for the written word (in a European context) to get oral transmission of these sorts of techniques. So if you run a prehistoric or Bronze Age campaign, rest assured that "Fighter" class characters deserve their mechanical benefits. :-)

2) ...But Fighters from different cultures might fare differently. Now this one is tricky. This isn't an endorsement or an encomium (see below), but just a recognition of the socio-political realities of human experience. As Hermann et al (2020) point out, fighting methods rely not only on bodily biomechanics but also on socially- and culturally-formed behavior patterns that will shape how one may and should move and act in combat. And as they illustrate, we can see evidence for the spread (and later, apparently, the retreat) of new martial techniques across prehistoric Europe. This means that at some point fighters with more sophisticated capabilities will have encountered fighters without such capabilities, giving the more sophisticated an edge in the power dynamic between different communities.

3) ...So consider applying a mechanical bonus as relevant. One *could* simulate this distinction at the table by giving Advantage or Disadvantage to PCs or NPCs who face fighters from cultures or backgrounds with more/less developed swordsmanship capabilities. Imagine a PC Fighter skilled in blade-binding facing off against two or three fighters ignorant of that technique; hand the lone PC a bonus d20 with Advantage on their attack/defense rolls, and suddenly this lopsided exchange just got a lot more interesting.

I would suggest, however, that GMs should remain mindful of the broader power dynamics involved outside the sword-fight itself. What we call colonialism and imperialism had their own prehistoric and ancient analogies, and when we start tossing around ideas about 'more skilled' and 'less skilled' cultures, we need to be aware of the dynamics at play and the prejudices that can dwell therein (by highlighting objective differences in capabilities of technique within one competitive arena, swordfighting, I'm not inviting GMs to start thinking of cultures as superior or inferior to others). I can imagine, however, that if someone wanted to grapple in honest, interesting ways with imbalanced power dynamics in antiquity, it could be interesting to have simple mechanical tools for showing the martial advantage of Servants of the Citadel/the raiders from over the waves/etc., while honestly addressing the inequalities and prejudices connected to such imbalances, too. Again, if I can self-advertise in closing, my Brazen Backgrounds tries to suggest some of those dynamics without making them overwhelming.