Despite all the COVID shutdowns, things are very busy around here - I'm still teaching via online media, and this is that late-semester-crazy-busy season. Still, I have been able to get some gaming action in nonetheless. No doubt, this has nothing to do with the recent Pirates of the Caribbean viewings at our place, but...last weekend, one of my kids helped me do some further play-testing of a solo/coop minis skirmish ruleset I'm working on, intended for heroic swashbuckling/black powder action where a few gallant heroes (or desperate rogues?) face off against much greater numbers of enemies, and act quite dashing while they do it!

Just that afternoon, coincidentally, I learned that Nordic Weasel Games (see my positive recent review of their Five Klicks from the Zone) has just released beta rules for a black powder solo skirmish game, Five Kilometers from Leipzig! Oh well... ;-) At any rate, my own system-in-development also aims at that solo niche, but I'm trying to accomplish quite different things with the system overall. I have to say that after several initial play-test rounds, I'm very pleased with it - it clearly needs some more work as it develops, but the core bones really seem solid and it provides a very fun game that regularly leads to the kinds of swashbuckling shenanigans I'm after.
Our last test-battle saw 3 heroes variously jump, swim, climb, swing from the rigging of ships, drop onto enemies below, and even duel to the death atop a tall marble column supporting a statue of King George! One of the 3 heroes died right before the end, but oh it was smashingly heroic. 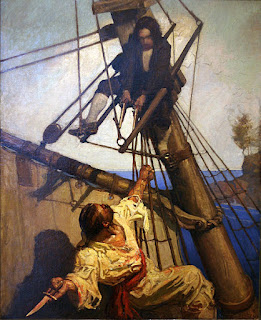 + fully engineered for solo/coop play from the beginning.
+ quick-playing, dynamic game; figs can easily move around the board and movements that change the tactical situation in one turn are normal and easy to administer.
+ 'Swashbuckling' actions to interact with the physical game environment are flexible, open to player creativity on the spot, and easy to administer. Success is not guaranteed, but failure won't be too punitive. They should evoke genre, but be worth doing for more than just flavor - the mechanics should encourage such behavior, but not in an artificial way; rather, the game should highlight the ways 'swashbuckling' well can (colorfully) solve tactical problems.
+ When in doubt, pick the cinematic/dynamic over realistic game physics.
+ Each round of combat involves meaningful decision-making that evokes (even if abstractly) the cut-and-thrust of parrying and striking back and forth. Your choices will shape the outcome, not just luck!
+ Blackpowder weapons are powerful but reloading takes time, so each shot fired is a notable investment of resources.
+ A few heroes face off against a much larger number of enemy combatants - to facilitate this, enemies use slightly different, streamlined version of the "heroes'" rules. Enemies may reinforce mid-game, even multiple times, depending on the outcome of push-your-luck player decisions. The game should involve a bit of nail-biting tension.
+ The heroes can definitely die, but they aren't going to go down quickly or easily.

Several games have particularly influenced my internal "design conversation" - not that I'm always doing what they're trying to do; in fact sometimes I'm moving off in a very different direction, but some piece of the whole shows their influence in one way or another. These are:

+ Honor + Intrigue (an RPG, not skirmish wargame, but hey...)
+ CROM!
+ Sellswords & Spellslingers
+ Five Parsecs/Five Leagues/Five Klicks (and now Five Kilometers from Leipzig)
+ And One for All
+ Pulp Alley

Interestingly, this list does NOT include Ganesha's Flashing Steel, which I know of but don't have, and hear is quite excellent (I am familiar with their core Song of Blades... system); though I'm inspired by one aspect of their SS&SS (the nail-biting solo tension that game can produce), I'm trying for a quite different approach to their games based on the SoB&H "engine."

Anyway, I don't know what this will all amount to, but perhaps at some point I'll have something I can share with others. For now, we're having great fun with this.